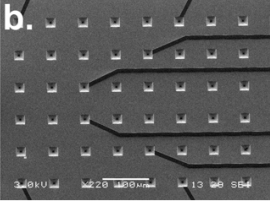 To study brain cell’s operation and test the effect of medication on individual cells, the conventional Petri dish with flat electrodes is not sufficient. For truly realistic studies, cells have to flourish within three-dimensional surroundings. Bart Schurink, researcher at University of Twente’s MESA+ Institute for Nanotechnology, has developed a sieve with 900 openings, each of which has the shape of an inverted pyramid. On top of this array of pyramids, a micro-reactor takes care of cell growth. Schurink defends his PhD thesis June 23.

A brain-on-a-chip demands more than a series of electrodes in 2D, on which brain cells can be cultured. To mimic the brain in a realistic way, you need facilities for fluid flow, and the cells need some freedom for themselves even when they are kept at predefined spaces. Schurink therefore developed a micro sieve structure with hundreds of openings on a 2 by 2 mm surface. Each of these holes has the shape of an inverted pyramid. Each pyramid, in turn, is equipped with an electrode, for measuring electrical signals or sending stimuli to the network. At the same time, liquids can flow through tiny holes, needed to capture the cells and for sending nutrients or medication to a single cell.

After neurons have been placed inside all the pyramids, they will start to form a network. This is not just a 2D network between the holes: by placing a micro reactor on top of the sieve, a neuron network can develop in the vertical direction as well. Growth and electrical activity can be monitored subsequently: each individual cell can be identified by the pyramid it is in. Manufacturing this system, demands a lot of both the production facilities at UT’s NanoLab and of creative solutions the designers come up with. For example, finding the proper way of guaranteeing the same dimensions for every hole, is quite challenging.

Schurink’s new µSEA (micro sieve electrode array) has been tested with living cells, from the brains of laboratory rats. Both the positioning of the cells and neuronal network growth have been tested. The result of this PhD research is a fully new research platform for performing research on the brain, diseases and effects of medication.