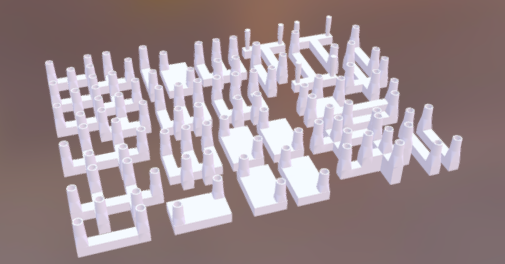 In response to a call to “Print the Future,” three Penn undergraduates won the opportunity to have their design 3-D printed aboard the International Space Station (ISS).

Rising seniors Jaimie Carlson, Laura Gao, and Adam Zachar formed ProtoFluidics to create an adaptable, modular microfluidic device. The team hopes that, once printed using the 3-D printer already on the ISS, astronauts will be able to use their design to perform specialized research using tiny amounts of fluids in space.

Microfluidics research involves using intricate circuits of tubes and reservoirs to study biological or chemical processes in a precise, controlled way. The resulting arrays can often fit in the palm of your hand. Microfluidic experiments are already being conducted on the ISS, but researchers do not currently have the capability to make new circuitry on the station.

Carlson explains that while many exciting or novel objects can be 3-D printed in space, microfluidics are a viable design that’s actually useful for lab research. “Our modules are components that can be put together to make any number of designs,” Carlson says. “We want to get to the point where we could build any microfluidic device in space, using only our modules.”

In this first annual Print the Future competition, students were challenged to help bring science fiction to life by creating a design that tests the limits of 3-D printing with the potential to advance human existence in space. While ProtoFluidics’ work exists on a micro scale, the wide scope of the project required them to truly combine their individual areas of expertise.

Judges evaluated the submitted designs based on the caliber of science and engineering components, potential for commercial success, and creativity.

The team needed to follow certain design guidelines, like minimum wall thickness and spacing requirements, but were otherwise allowed to fill an entire print bed, which is the maximum space that one 3-D printer can cover at a time. They have already printed their design on Earth at Penn’s Rapid Prototyping Laboratory and via 3D Hubs, a web-based platform that connects people with local 3-D printing services. They plan to do further testing with the modules this summer.

Printing the small, hollow tubes of microfluidic devices may prove especially challenging. Researchers have 3-D printed microfluidic arrays before, but ProtoFluidics’ design will be the first such prototype aboard the ISS. After its lofty birth, the system will return to Earth for further testing using the advanced tools of Prairie Nanotechnology, a materials analysis and nanotechnology company.

Though the team didn’t limit their design to one particular experiment, they did replicate a few specific devices from previous experiments, which they’d like to test when they return from space. They hope that scientists will be able to customize the arrangement of minuscule tubes and mixers to create research setups tailored to their specific needs. But first, the team needs to ensure that certain conditions are met, like successfully printing a channel that actually allows liquid to flow through it.

While testing their design, ProtoFluidics would sometimes find a blocked channel or rough exterior. As an additive manufacturing process, this particular type of 3-D printing (known as fused deposition modeling) involves layers of material, often melted plastic, that are deposited on each other and harden into a solid object. On Earth, 3-D printed structures can sometimes “drip,” as the extruded plastic doesn’t firm up right away. Carlson is hoping that the microgravity of space might eliminate that problem, though they’ll have to be patient in finding out, as their design likely won’t be printed in space until sometime in autumn.

Microfluidics research has applications both among the stars and closer to home, but certain properties make it particularly suitable for space. Though the liquids used for microfluidics are the same as the ones used in conventional labs, they display different properties in the tiny channels than they do on a larger scale. In microfluidic systems, Carlson explains, water behaves more like honey or molasses because the forces between the molecules (like friction) are stronger than the forces around them (like gravity).

The devices’ small size, reduced weight, and minimal fluid requirements make them ideal for work in space. And with ProtoFluidics’ design, researchers could customize and change the system throughout the experimental process, a feature not normally available in a lab more than 200 miles from Earth.

ISS astronauts perform a variety of carefully planned scientific experiments, but they are different from the iterative process that unfolds on the ground. In an earthbound experiment, scientists might tweak the setup or design of the research once they get some data feedback. In space, any specialized equipment must be carried to and from the station in meticulously scheduled launches with tight space and time constraints, and a cost of thousands of dollars for every kilogram of cargo.

The Penn students’ design would allow for rapid changes to the modules with a simple file update. ProtoFluidics also hopes to create a software system that allows for user-friendly microfluidics assembly on Earth as well.

“In the process of doing this project we realized there weren’t a lot of good design tools for microfluidics,” Carlson says. “We’re trying to streamline the process.”

She explains that existing software programs aren’t customized to the task and can be cumbersome to use for researchers who don’t normally design mechanical structures, like biologists, who are some of the most common users of microfluidic arrays. They use the systems to grow cells, test drugs, and even diagnose disease. The ability to create these tiny devices aboard spacecraft could enable longer, farther journeys for future space explorers.

In addition, space travel is associated with a weakened immune response, more virulent pathogens, and a confined environment that increases the risk of infection. Current diagnostic standards require sending samples back to Earth, a process that is both costly and time-consuming, and one that would not be feasible for long-term space inhabitants. Improving diagnostics aboard the ISS could address this and also have implications for remote or under-resourced areas of our planet without access to laboratory equipment.

Zachar says that the initial inspiration for ProtoFluidics came from a talk given by Boston University’s Douglas Densmore detailing his software tools for automating synthetic biology. The talk was part of the Electrical and Systems Engineering (ESE) departmental seminar series, a weekly event that brings researchers from within and outside Penn to campus to speak on a variety of ESE-related topics.

Prior to their presentation at the Print the Future event, ProtoFluidics also won a pitch contest in February that was organized by the Penn Aerospace Club. The club was co-founded by Zachar and Gao to serve as a community for students interested in aviation and spaceflight. It also connects students with opportunities in the aerospace industry.

Carlson says that pitching halfway through the design process was very helpful, as it allowed the team get feedback on their ideas and make changes. The judges of that contest also introduced the team to people in the field who might be interested in their product.

The Print the Future competition may have set its sights on the horizons of space travel, but just because ProtoFluidics’ work may one day help to enable human civilization among the stars doesn’t mean that they’re leaving Earth in the rearview mirror.

“What we’re hoping to do is make microfluidics design a lot more efficient both on Earth with software,” Carlson says, “and in space with software and 3-D printing together.”

The Print the Future contest was organized by Enterprise in Space, an educational outreach arm of the National Space Society, an independent nonprofit organization that advocates for human space exploration and development.