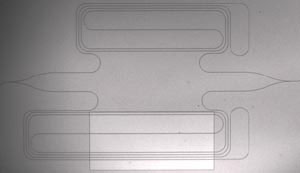 The two arms of the interferometer used to detect microRNAs in urine samples. The top one is the reference arm while the bottom one is the sensing arm ( Image Credit: A Star)

MicroRNAs are a newly discovered class of short (about 19 to 24 nuclides in length) fragments of noncoding RNAs that are useful biomarkers for diagnosing various diseases, including cardiac disease and some cancers. Since they are surprisingly well preserved in fluids such as urine and blood, their detection is well suited to a rapid, point-of-care method.

Mi Kyoung Park at the A*STAR Institute of Microelectronics and her co-workers have devised a silicon photonic biosensor that can detect tiny changes in the phase of a light beam caused by hybridization between an immobilized DNA probe and target microRNAs in a sample.

A laser beam travels through a waveguide, which splits into two arms: a sensing arm in which the light interacts with the sample and a reference arm. The two light beams then rejoin each other. Binding between the DNA probe and the target microRNA alters the phase of the light traveling in the sensing arm, whereas the phase in the reference arm remains unchanged. The amount of target microRNA in the sample can be determined by monitoring the variation in the intensity of the output beam.

The device has many practical advantages, Park explains. “Existing methods to detect microRNAs are time consuming and require cumbersome machines, which limit their usefulness in clinical settings,” says Park. “This inspired us to develop a simple and efficient point-of-care device for detecting microRNAs.” The device is also highly sensitive and thus does not require labeling or amplification; it can deliver results within 15 minutes, eliminating the need for patients to return for their results; and it can potentially detect up to 16 targets in a single test.

To demonstrate the system Park and her team used it to detect two types of microRNAs in urine samples from three patients with late-stage bladder cancer; the tests involved a single reaction and took 15 minutes. The microRNA levels of the patients differed markedly from those of two healthy subjects.

The researchers are excited about the device’s potential. “The system can be expanded to detect a number of microRNAs of different species and should be useful for a variety of point-of-care clinical applications,” says Park.