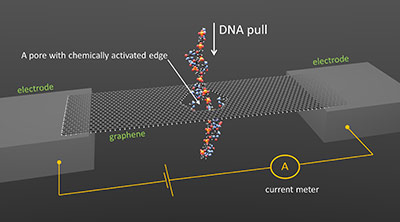 Researchers at the National Institute of Standards and Technology (NIST) have simulated a new concept for rapid, accurate gene sequencing by pulling a DNA molecule through a tiny, chemically activated hole in graphene—an ultrathin sheet of carbon atoms—and detecting changes in electrical current.

The NIST study suggests the method could identify about 66 million bases—the smallest units of genetic information—per second with 90 percent accuracy and no false positives. If demonstrated experimentally, the NIST method might ultimately be faster and cheaper than conventional DNA sequencing, meeting a critical need for applications such as forensics.

Conventional sequencing, developed in the 1970s, involves separating, copying, labeling and reassembling pieces of DNA to read the genetic information. The new NIST proposal is a twist on the more recent “nanopore sequencing” idea of pulling DNA through a hole in specific materials, originally a protein. This concept—pioneered 20 years ago at NIST—is based on the passage of electrically charged particles (ions) through the pore. The idea remains popular but poses challenges such as unwanted electrical noise, or interference, and inadequate selectivity.

By contrast, NIST’s new proposal is to create temporary chemical bonds and rely on graphene’s capability to convert the mechanical strains from breaking those bonds into measurable blips in electrical current.

“This is essentially a tiny strain sensor,” says NIST theorist Alex Smolyanitsky, who came up with the idea and led the project. “We did not invent a complete technology. We outlined a new physical principle that can potentially be far superior to anything else out there.”

Graphene is popular in nanopore-sequencing proposals due to its electrical properties and miniaturized thin-film structure. In the new NIST method, a graphene nanoribbon (4.5 by 15.5 nanometers) has several copies of a base attached to the nanopore (2.5 nm wide). DNA’s genetic code is built from four kinds of bases, which bond in pairs as cytosine–guanine and thymine–adenine.

In simulations (see accompanying animation) of how the sensor would perform at room temperature in water, cytosine is attached to the nanopore to detect guanine. A single-strand (unzipped) DNA molecule is pulled through the pore. When guanine passes by, hydrogen bonds form with the cytosine. As the DNA continues moving, the graphene is yanked and then slips back into position as the bonds break.

The NIST study focused on how this strain affects graphene’s electronic properties and found that temporary changes in electrical current indeed indicate that a target base has just passed by. To detect all four bases, four graphene ribbons, each with a different base inserted in the pore, could be stacked vertically to create an integrated DNA sensor.

The researchers combined simulated data with theory to estimate levels of measurable signal variations. Signal strength was in the milliampere range, stronger than in the earlier ion-current nanopore methods. Based on the performance of 90 percent accuracy without any false positives (i.e., errors were due to missed bases rather than wrong ones), the researchers suggest that four independent measurements of the same DNA strand would produce 99.99 percent accuracy, as required for sequencing the human genome.

The study authors concluded that the proposed method shows “significant promise for realistic DNA sensing devices” without the need for advanced data processing, microscopes, or highly restricted operating conditions. Other than attaching bases to the nanopore, all sensor components have been demonstrated experimentally by other research groups. Theoretical analysis suggests that basic electronic filtering methods could isolate the useful electrical signals. The proposed method could also be used with other strain-sensitive membranes, such as molybdenum disulfide.

About half of the simulations were performed by a co-author at the University of Groningen in the Netherlands. The rest were done at NIST.

Source: The National Institute of Standards and Technology (NIST)