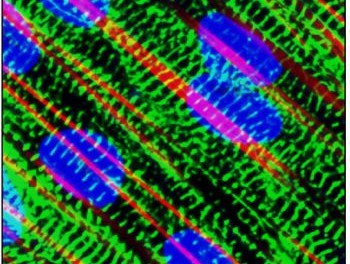 Stem cell-based therapies have the potential to transform the treatment of almost every major health condition, but possibly none quite as prevalent as heart disease. As the world’s number one cause of death, heart disease kills more than 7.5 million people each year, and its irreversible course leaves millions more dependent on devices and medications to survive.

Since 2009, scientists have injected, transplanted and infused millions of different types of stem-cell derived treatments into dying human hearts with the goal of reversing heart disease – but so far, the results have been mixed.

“We’ve seen a lot of tantalizing data over the years, but also a lot of variability in outcomes. Some people have small gains, while others gain nothing,” says Mahmood Khan, M. Pharm, PhD, a scientist at the Davis Heart and Lung Research Institute at The Ohio State University Wexner Medical Center. “We still don’t know exactly how stem cells work to heal the heart. But we do know that 90 percent of stem cells die or disappear within the first four days of transplant, so their potential is probably not being fully realized.”

As scientists around the nation push forward with clinical trials to identify a cardiac stem cell regimen that can gain FDA approval, Dr. Khan and Emergency Medicine researcher Mark Angelos, MD, are approaching the problem from a different perspective: finding ways to make stem cells more likely to survive the inhospitable microenvironment of a scarred heart.

“A damaged heart has areas of poor oxygenation and blood flow. It is not a friendly place for stem cells to thrive,” said Dr. Mark Angelos, Vice Chair of Research in the Department of Emergency Medicine at Ohio State’s College of Medicine. “By developing techniques that improve stem cell delivery and survival, we’re hopeful that the therapy will be able to yield more consistent and greater benefits.”

Pre-treatment Technique Stops Cardiac Cell Suicide
Within hours and days after a heart attack, oxygen-deprived tissue in the heart dies and chemical messengers instruct damaged cells to self-destruct. It’s generally believed that the optimal window for delivering stem cell based therapies is during this time, when stem cells might have a chance to short circuit the remodeling process, and prevent the kind of scarring which ultimately leads to permanent heart failure.

“It’s the probably the best and worst time to deliver stem cell therapies. We are literally sending them into battlefield where there is minimal oxygen and genes are telling cells to self-destruct,” said Dr. Khan.

Dr. Khan says that 30% of all mammalian protein-encoding genes are regulated by microRNAs (miRNAs), single-stranded RNA molecules approximately 22 nucleotides in length. Research has shown that miRNAs have great potential as a therapeutic target for the treatment of number of diseases including cardiovascular disease. Altered expression of miRNAs such as miR-1, miR-133, miR-21 and miR-208 has been shown to contribute to the development of heart disease. The researchers honed in on miR-133a which appears to play a role in slowing fibrosis and cardiac remodeling. Importantly, levels of miR-133a are reduced in people who have suffered a heart attack.

The research team hypothesized that if they could increase the levels of miR-133a in stem cells as they are cultured, they might be able to preprogram the cells to survive. Supported by a pilot grant from the Ohio State Center for Clinical and Translational Science (CCTS), the team bioengineered a molecule to induce mesenchymal stem cells (MSCs) to produce miRNA-133a. When transplanted into an animal model of cardiac ischemia, the pre-treated MSCs showed improved survival over non-treated MSCs.

“We found that the pre-treated MSCs did a better job at decreasing the global damage to the heart, along with improvement in the left-ventricular wall thickness compared to the untreated MSCs,” said Dr. Angelos. “MSCs are a commonly used cell type in current heart failure studies, so our findings are definitely relevant to that work.”

The team’s results were published in the March issue of the Journal of Cardiovascular Pharmacology.

Nanofiber Band-Aid for Broken Hearts
While working on ways to increase stem cell survival, the researchers also tackled another issue facing stem cells – how to help them seamlessly function alongside existing heart tissue.

Currently, most stem cells are grown on a flat culture plate and either injected directly into the heart – usually on the periphery of scar tissue – or infused into the heart via an artery. While most of these stem cells either die or are diffused throughout the body, successfully transplanted stem cells sometimes inadvertently interrupt heart function.

“The heart is a constantly moving, connected matrix of muscle fibers working together to make the heart pump in sync,” said Dr. Angelos. “Transplanted stem cells may not align with native tissue, potentially disrupting or attenuating signals that keep a steady heartbeat. There’s evidence that this could contribute to arrhythmias.”

To create a more secure environment in which stem cells can engraft – and one that more closely resembles healthy heart tissue, Drs. Khan and Angelos have used a biodegradeable nanofiber “patch” seeded with human inducible pluripotent stem cells derived cardiomyocytes (hiPSC-CMs). While a number of stem cell types are available, researchers used hiPSC-CMs because these cells are patient derived and could be used for disease remodeling and autologous stem cells transplantation in patients with failing hearts.

The aligned nanofiber patch and standard culture plate were both seeded with hiPSC-CMs, and then both were compared for calcium signaling and synchronous beating. Within two weeks, both stem cell cultures were spontaneously beating like a miniature heart. However, the linear grain of the nanofiber formed an aligned pattern of cells that looks – and functions – more like a healthy heart tissue.

“The cardiomyocytes cultured on a flat plate are scattered and disorganized. Cardiomyocytes grown on the nanofiber scaffolding look more like healthy heart cells, beat more strongly and in greater synchronicity than cells from the flat plate,” said Dr. Khan. “Next, we hope to use what we’ve learned from this study to develop a thicker, multi-layer patch that could help restore thin and weakened heart walls.”

Drs. Khan and Angelos see a great potential for future clinical applications to treat patients with heart failure by bandaging the damaged heart muscle with the nanofiber cardiac patch. They say it’s also possible that they could someday combine the microRNA pre-treatment technique and the patch to give stem cells a survival boost along with a protective structure to improve outcomes.