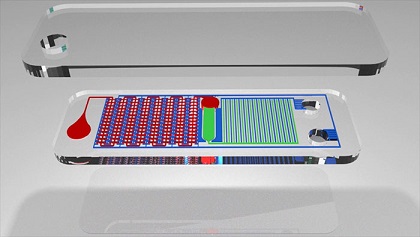 A digital illustration of the design of the SIMPLE chip

A team of biophysicists and bioengineers in the US have developed a $10, self-powered microfluidic chip that can rapidly detect disease-related RNA or DNA in blood samples. The chip is faster and significantly cheaper than current lab-based detection methods. The researchers say that it could be particularly useful in low-income parts of the world and could open the door to affordable preventative healthcare for everyone.

There is a lot of interest in developing low-cost, portable nucleic acid (RNA and DNA) detection technologies, which could diagnose important diseases and revolutionize preventative medicine. Current standard methods for amplifying and detecting nucleic acids are based on a method known as polymerase chain reaction (PCR). This is an expensive technique that requires trained technicians, multiple sample preparation steps, and powered laboratory equipment such as centrifuges, making it impractical in low-resource settings, small clinics and at home.

Simple point-of-care tests for diseases are available, but these detect protein biomarkers and lack sensitivity. This means that patients are often unwell before they are tested, reducing the possibilities for preventative treatment. “It is time to use sensitive and quantitative circulating nucleic acids-based molecular diagnostics,” explains Luke Lee, a biophysicist and bioengineer at the University of California, Berkeley. “[These techniques] can identify diseases early, instead of just confirming them.”

Writing in Scientific Advances, Lee and colleagues describe a new device that can quickly detect nucleic acids in blood samples without any preparation steps. Dubbed the SIMPLE chip, the device employs a “vacuum battery”, which drives a microfluidic system that automatically separates plasma from whole blood. The plasma is directed into 224 tiny “microwell” chambers in a process that replaces centrifugal and other sample preparation steps used in standard PCR tests (Scientific Advances 3 e1501645).

The chip is made in two sections from the polymer polydimethylsiloxane (PDMS). The blood-analysis portion of the device consists of a series of wells, channels and microwells, while the vacuum-battery portion of the device has a pattern of channels and voids for air to flow through. The two systems roughly mirror each other, but are separated by PDMS, which has a nanoporous structure through which air can flow but blood – and other liquids – cannot.

After construction, air is removed from the device and it is sealed in a vacuum bag. When the chip is ready to be used, the blood sample is mixed with a biomarker that reacts with the nucleic acid being detected and the bag is opened. A drop of the blood and reagent mixture is then placed on the chip. As the chip refills with air, the suction from the low pressure in the system pumps the blood sample through the chip.

Lee told Physics World that optimizing the size and surface area of the lung-like vacuum battery has extended the operation time of the chip. Users have around 15 min to add a blood sample once the vacuum bag is opened.

The main channel through which the blood follows is separated from the microwells by 40 µm “microcliffs”. In the channel, sedimentation causes blood cells to drop while the plasma rises and is drawn over the microcliffs into the microwells.

Once the microwells are full, the chip is placed on a simple heat pack, which starts the replication process to increase the amount of any nucleic acids in the plasma. This amplification is driven by an initiator, magnesium acetate, embedded in the microwells. If the correct nucleic acids are present, then the biomarker – added with the blood sample – changes colour or fluoresces as their numbers increase, indicating a positive result.

The chip was able to detect HIV and MRSA in blood samples in less than 30 min. Analysis also showed that the plasma in the microwells was indistinguishable in quality from centrifuged plasma. The chip cost less than $10, which the researchers say could be further reduced with mass production.

Lee says that as well as enabling more sensitive, cheaper PCR-based tests, the chip could also allow rapid detection of multiple diseases. The next step for the team is to embed biomarkers in the microwells, so that blood samples don’t need to be mixed with a reagent. This opens up the possibility of different biomarkers in each microwell.

If each microwell contains a different biomarker, “you can envisage that in the future, in one drop of blood, you can analyse different indicators for different diseases”, explains Lee. This could include infectious diseases, cancers, neurological disorders – any disease that produces its own unique DNA.

Ultimately, Lee would like to create a chip that analyses blood from a simple finger prick and can be operated by anyone. “Why don’t we make an automatic integrated chip that has a low cost, so that everyone can see the fluctuation of their biomarkers every week or month, so people can change their behaviours?”

To test and further develop the SIMPLE chip – and similar low-cost health technology – Lee has set up the Biomedical Institute for Global Health Research and Technology at the National University of Singapore, with support from the Singapore government. He is keen to see more physicists involved in biomedical research. “Personally I am a physicist, and I would like to invite all physicists to become involved in this kind of biomedical device research. There are many innovative things can be done with application of the physics.”