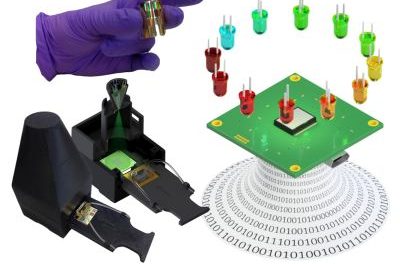 A team of researchers at the University of California, Los Angeles (UCLA) has applied machine learning to a mobile device they’ve designed that can detect proteins, cancer biomarkers, viruses, and other small objects at much lower cost.

The primary goal of machine learning is to “train” an algorithm with a large amount of data so that it can “learn” complex trends and statistics and, in turn, be used to predict outcomes with far more accuracy than a traditional model. So, the UCLA team—led by Aydogan Ozcan, Chancellor’s Professor of Electrical Engineering and Bioengineering and associate director of the California NanoSystems Institute—took the machine learning concept and applied it to plasmonic sensing, constructing a mobile and inexpensive device that is far more accurate than conventional sensor designs.

The prototype device is lightweight and portable, and consists of a 3D-printed plastic housing, four different-colored light-emitting diodes (LEDs), and a camera. As described in the research team’s paper on this work, a machine learning algorithm selects the four most optimal LEDs out of thousands of other possible choices, coming up with the most accurate design, and a computational method to quantify the sensor output. This work aims to provide a design tool that other engineers and researchers can use to optimize their own low-cost optical sensor readers for various applications in health care as well as environmental monitoring.

By using newly discovered nanofabrication methods, the research team was able to produce flexible plasmonic sensors that are robust and inexpensive enough to be disposable. These sensors can undergo “surface modification,” which ensures that only the molecules of interest interact with the amplified electric field. What’s more, the sensors can be “modified” to capture any number of specific bio-targets such as bacteria, viruses, or cancer cells, among many others.

To use the plasmonic reader, a fluidic specimen, such as blood or urine, is applied to the sensor surface using a disposable microchip. The sensor then fits into a cartridge that can be inserted into the device, which then automatically measures and analyzes the specimen, delivering the sensing result. The research team says that such a plasmonic reader could be designed as a mobile-phone attachment to further drive down the costs and take advantage of cloud connectivity as well as the computational power of smartphones.