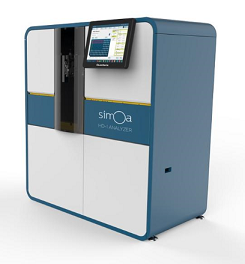 Quanterix’s diagnostic device is able to test for proteins in blood that correlate with a variety of diseases (Image credit: /Quanterix)

Two months after announcing an expansion into Asia, Lexington diagnostic company Quanterix will set its sights on developing a cancer test with $46 million in Series D funding.

To date, the company has raised $100 million.

The latest funding will help the company develop new diagnostic tests, enable Quanterix to expand into new global markets and aid researchers in the development of a smaller version of its molecular testing device, which can measure minuscule amounts of proteins in the blood.

Currently, Quanterix’s device, known as Simoa, can test up to 35 different proteins of such a small amount executives equate it to finding a single blade of grass in a field the size of Alaska. Researchers said those proteins are clues to diseases, from Alzheimer’s, to heart attacks, to concussions. By the end of the year, Quanterix expects to have 100 different diagnostic tests.

Executives did not say whether the latest funding round would position the company to go public in the near future. In previous interviews, CEO Kevin Hrusovsky said the company was aiming to go public this year.

Beyond growth and a potential IPO, Quanterix has experienced massive success in sales of its Simoa device, which doesn’t require FDA approval when used for research.

Sales in the U.S. and nine European countries have helped tripled revenue from $4.5 million in 2014 to $12 million in 2015. Revenue projections for this year are $22 million, executives have said.