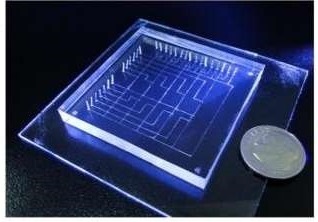 For a healthy individual, an infection of Cryptosporidium parvum may mean nothing more than a few days of bad diarrhea. For someone with a compromised immune system, it can mean death, following an excruciating, protracted bout of watery diarrhea. Recently, researchers at Fudan University’s Institute of Biomedical Sciences in Shanghai developed a lab-on-a-chip device that can rapidly diagnose cryptosporidium infections from just a finger prick—potentially bringing point-of-care diagnosis to at-risk areas in rural China in order to improve treatment outcomes.

Worldwide, treatment for the parasitic infection consists largely of oral rehydration and managing symptoms until the body clears the infection, something that may take far longer for people with HIV infections. Currently, China has more than 780,000 people living with HIV/AIDS, but there is very little data on how many of them are living with Cryptosporidium infections. This stems from the difficulties of diagnosing an infection in the field—poor sensitivity and a short window of spore secretion both limit the viability of acid-fast staining, a standard diagnostic assay in use today. More advanced immunoassays, such as ELISA, are difficult to use broadly because they require relatively advanced lab settings and skilled technicians.

To address this need, Xunjia Cheng and Guodong Sui, both professors at Fudan University, sought to develop a device better suited for the field. Cheng’s research has involved medical protozoa and opportunistic HIV infections, and Sui’s lab focuses on microfluidics. This week in the journal Biomicrofluidics, from AIP Publishing, they describe how they developed and tested the new microfluidic device as the fruit of this collaboration.

The microfluidic chip was designed by AutoCad software and manufactured from a widely used silicon-based organic polymer known as PDMS. It consists of functional valves, pumps and columns, collectively sitting at the heart of a platform of reagent cartridges, an injection pump, a fluorescence microscope and a digital camera. The chip itself is small—3 cm by 2 cm—and only costs about a dollar to manufacture, according to Sui.

The microfluidic device tests for the presence of the parasites’ P23 antigen, a major molecular target of host antibody responses against the pathogen’s infective stages.

The device is easy to use, allowing just about anybody to operate it, Sui and Cheng said. It can process up to five samples at a time, and the entire detection process can be completed in 10 minutes with only two microliters of blood—less than the volume of a typical mustard seed.

Sui and Cheng tested their device’s efficacy at diagnosing Cryptosporidium infections in 190 HIV-infected patients in Guangxi, China. They found that the device’s diagnostic capabilities were on par with those of ELISA – essentially giving you a device that’s as effective as the current diagnostic standard, with huge potential reductions in cost, timeframe, size and the amount of training needed to operate.

Future work for Sui and Cheng involves expanding the chip’s sample processing capacities to include other infectious diseases, as well as increasing the device’s sensitivity and specificity.