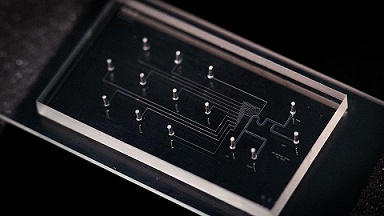 A microfluidic chip invented by engineers from NUS and start-up Clearbridge mFluidics is a world’s first in using microfluidic flow to isolate selected tumour cells for single cell analysis — giving accurate assessment of the cancer type so as to enable targeted treatment.

The novel system provides highly sensitive readings that identify low-frequency occurring mutations, allowing better cancer diagnosis. The innovation could help doctors have a better sense of what drugs to use, based on the presence of specific activating but treatable mutations, as well as track changes or treatment progress during anticancer therapy.

Cancer cells can vary from one another, with some being more malignant and invasive. This heterogeneity limits the effectiveness of treatment, leading to patients with the same cancer showing different treatment outcomes. Since knowledge of cancer composition is crucial, the researchers seek to determine the critical ones such as cancer stem cells or cancer cells with druggable mutation, so that the right treatment is administered to the patient.

“If we do a bulk analysis of the whole tumour cell population, we may miss out information of the few malignant cells that we should target because they are masked by the many other non-malignant cancer cells. This is the motivation behind the system we develop,” said Prof Lim.

The device uses microfluidic dynamics to move cells and passively hold them cell by cell in each of the controlled chambers alongside the main channel. The selected cells can then be individually ejected from the cell chambers for downstream assessment. With this creative approach, the team is able to quickly and efficiently trap single cells, yet have the flexibility to choose and separate any cell of interest. The biochip takes about two to three hours to process a blood sample of about 101,000 cells with little losses. Conventional methods such as micropipette aspiration is very labour-intensive and prone to human error, while dielectrophoresis is expensive and requires special skills to operate.

The team has proven that the microfluidic device is able to perform high-throughput, selective picking and isolation of single circulating tumour cells (CTCs) to 100 per cent purity from a larger population of other cells. The biochip can separate the rare CTCs from blood samples from as few as 1 in 20,000 white blood cells. More than 120 samples taken from patients from the National Cancer Centre Singapore and Singapore General Hospital have been tested.

The breakthrough work, published in Scientific Reports earlier this year, could potentially pave the way to enhanced tailored treatment, or personalised medicine. Single cell analysis could also be used in numerous other clinical applications besides cancer, said Dr Tan. He revealed that a prototype of the system will be out year end, with an improved version targeted for 2017.