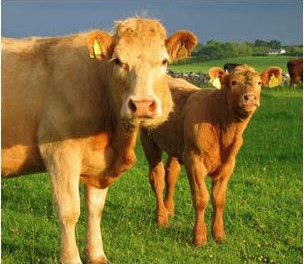 Next-generation sequencing (NGS) and genotyping technologies are revolutionizing animal breeding. Traditional animal breeding relies on scoring animals based on their observed physical characteristics (phenotype) to determine their estimated breeding value (EBV). The process is often inefficient and time consuming, as many traits are hard to assess and evident only after the animal reaches maturity, resulting in a delay in verifying breeding results.

Now, NGS is enabling researchers to quickly and cost effectively sequence livestock genomes to discover relevant DNA variants.  Genotyping arrays designed to measure this variance can then be used to develop genomic breeding values (GBVs) which are quicker and more accurate than the traditional EBVs.

Recently, the Irish Cattle Breeding Federation (ICBF), a non-profit organization charged with providing cattle breeding information services to the Irish dairy and beef industries, chose Illumina as its technology partner for their Beef Data and Genomics Program. The Program, which will run from 2015 until 2020, will improve the generic merit of the national herd.

Participating farmers will be required to genotype 15 percent of their cows by submitting samples to the ICBF. ICBF aims to genotype one million cattle by the project mid-point of 2017 and expects to genotype over two million animals over the course of the entire project.

The Beef Data and Genomics Program will have two key benefits. One is profitability to the farmers, which is for the greater good in Ireland where farming is a significant part of their economy. Secondly, as cows produce methane (a damaging greenhouse gas), more efficient management of the Irish national herd should have a positive environmental impact.

“This is a truly monumental step forward in agrigenomics. Illumina is thrilled to be part of the first project anywhere in the world to genotype one million animals,” says Iain MacLaren-Lee, market development manager for agrigenomics at Illumina. “Until now, tens of thousands, and at the extreme end, a couple hundred thousand samples have been done in a single project. One million is really moving towards a national scale.”

Illumina is helping the ICBF by designing a fully custom SNP array to test the animals. The project will use a combination of the Infinium array and NGS. DNA variants will be identified using NGS and deployed for screening large populations using Infinium Beadchip technology.

MacLaren-Lee adds, “The ultimate goal is to reach a point where every animal born will be genotyped. In Ireland that would be two million animals per year. It’s the ambition of ICBF and the Irish Department of Agriculture to be the first country in the world to genotype the entire national herd. This one million sample project is a major milestone on the road to national scale genomics in agriculture, and to the routine adoption of genotyping in cattle farming.”