The science of deep learning, a sub-discipline of artificial intelligence (AI), is only a recent development in the grand scheme of things, but during its short existence, it has been producing some impressive technological achievements. Advances in image recognition, language understanding, and translation have led to the development of virtual assistants, smart home speakers, and gains in cybersecurity, and they are leading the charge toward autonomous driving. Now, companies have found a way to use those AI smarts to fight cancer.

Deep learning involves the construction of artificial neural networks, using software and complex algorithms to recreate the capacity of the human brain to learn. These learning computers have a particular knack for sifting through vast amounts of data and recognizing patterns, getting smarter as they go. The first breakthrough involved feeding a system thousands of pictures of cats until the program was able to recognize a cat on its own.

Pathologists are responsible for reviewing all the biological tissues visible on a slide. However, there can be many slides per patient, each of which is 10+ gigapixels when digitized at 40X magnification. Imagine having to go through a thousand 10 megapixel (MP) photos, and having to be responsible for every pixel. Needless to say, this is a lot of data to cover, and often time is limited.

This technology has the potential to provide initial screenings, allowing doctors to review only those images that have been flagged as potentially cancerous. The system still requires improvement, as it generated a number of false positives — identifying cancerous cells where none were present. So, while AI won’t be replacing pathologists anytime soon, these algorithms could be used to pre-screen images and not only reduce the workload on doctors, but also serve parts of the world where pathologists are in short supply. 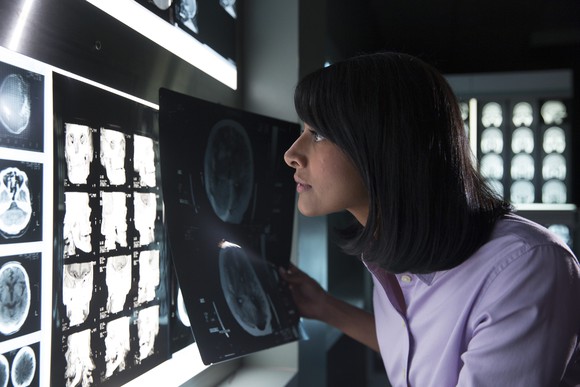 Google isn’t the only one testing AI for this purpose. Nearly a year ago, International Business Machines Corporation (NYSE:IBM) partnered with numerous health systems, imaging technology companies, and academic medical centers to train Watson AI, its cognitive computer, to read medical images. This more broadly based collaboration is focusing on cancer, cardiovascular disease, eye health, and diabetes. The company announced last month that it had expanded that initiative to 24 organizations worldwide, which will provide the vital input necessary to train the system. IBM also announced the first fruits of this endeavor, an application for the detection of one type of cardiovascular disease involving a narrowing of the heart’s aortic valve. It plans to expand Watson’s efforts to a variety of additional cardiovascular conditions in the near future.

Watson is already seeing success in a number of medical applications. In its most impressive results in the field to date, Watson reviewed the medical records of 1,000 cancer patients and was able to develop a treatment plan that concurred with oncologists’ recommendations with 99% accuracy. The AI was also able to provide additional recommendations in about 30% of cases that had been missed by doctors, thanks to its ability to review even the most recent medical research.

The future of medicine

Neither company provides specific information regarding how these AI-related medical breakthroughs would contribute to the overall business, and any contribution would represent only a minuscule part of each company’s total revenue at this juncture. These are still extremely early developments, but they illustrate the vast potential of AI in the not-too-distant future.

These AI algorithms won’t be replacing your doctor, but they might just make them more efficient. AI and its applications to medicine are still in early days, but I wouldn’t be surprised to hear more groundbreaking announcements in the near future.