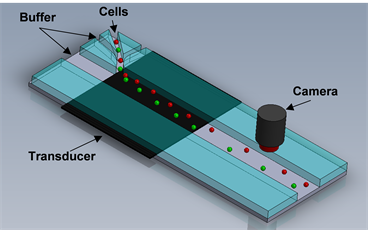 The acoustophoretic microfluidics device the team built allows it to utilize the pressure generated in the small device to manipulate small fluid samples such as blood drawn during an examination (Image Credit: Texas A&M University)

When treating cancer, time is the most important variable available for both the patient and the doctor. Time allows doctors to increase the knowledge of the specific cancer plaguing a patient. Time allows for improvements in medications and technologies used as part of a prescribed treatment plan. For the individual battling the cancer, every second spent post-diagnosis is counted as if could be the last.

According to the American Cancer Society’s (ACS) 2015 facts and figures, there will be an estimated 1,658,370 new cancer cases diagnosed in 2015, and 589,430 cancer deaths in the United States. The ACS also estimates that in the next 15 years cancer will surpass heart disease as the most common cause of death. The increase of new diagnoses will demand that researchers develop new treatments to administer to patients fighting for more time between diagnoses and treatments.

Dr. Yong Joe-Kim, director of The Acoustics & Signal Processing Laboratory at Texas A&M University, and his students are conducting research that seeks to develop a method of cancer detection that identifies the mechanical properties of cancer cells.

Kim, who is an associate professor and Pioneer Natural Resources Faculty Fellow II in the Department of Mechanical Engineering at Texas A&M, and his team is utilizing a National Science Foundation (NSF) grant.

Kim’s team worked with students from the NanoBio Systems Laboratory, which is directed by Dr. Arum Han, associate professor in the Department of Biomedical Engineering at Texas A&M, to develop an acoustic manipulation device. The device has the potential to decrease the amount of time needed to determine the effectiveness of a treatment.

The acoustophoretic microfluidics device the team built allows it to utilize the pressure generated in the small device to manipulate small fluid samples such as blood drawn during an examination. The device introduces an acoustic vibration to the sample causing the unique mechanical properties of each cell to react differently.

Since mechanical properties such as compressibility, size, density and the response to sound waves are unique for each cell in the human body, the cells reactions to the device can be viewed under a microscope allowing for clearer identification of cancerous cells.

“This is different from the current cancer detection methods as we are identifying how a cancer cell is behaving based on its mechanical properties in response to a specific treatment,” said Kim.

For generations the fight against cancer saw little changes in the standard treatment plans. After diagnosis patients are subjected to hours of surgeries, chemotherapy and radiation, all of which have the potential to do harm to healthy tissue and cells in the human body.

“The mechanical properties of the cancer cells when shaken using acoustic wave excitations in the sub-millimeter acoustophoretic microfluidic device, causes them to act uniquely different from healthy cells in the blood sample,” said Kim. “Based on the reactions to the vibration a patient’s treatment plan could be adjusted in response to a medication given days prior.”

The team is interested in continuing the research and developing a commercially viable acoustophoretic microfluidics device. If successful, the researchers will potentially develop a viable label-free separation technique with a lower operation cost than current methods. Most importantly the device will significantly decrease the time spent on ineffective treatments and buy more time for the patient.

In its current state the device has not been approved for human trials, however Kim is optimistic that the team is on a path to develop a device that would drastically change the current landscape of cancer detection. Kim’s research has provided mechanical engineering students an interdisciplinary research opportunity combining acoustics, microfluidics, lab-on-a-chip, biology and computational physics.

“We have proven the viability for analyzing the biophysical properties of cancer cells,” said Kim. “As we continue the research we anticipate developing modeling methods that will significantly advance the design of acoustophoretic microfluidic systems.”