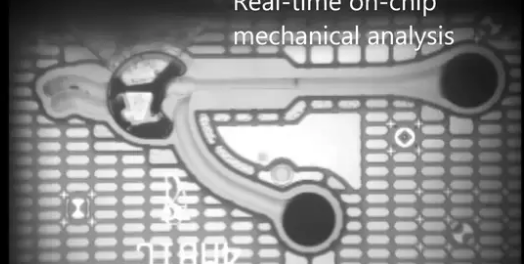 The world’s tiniest hammer will allow UCSB researchers to get a cellular-level understanding of what happens when force is applied to brain cells.

We’re all pretty familiar with what happens when we sustain a knock on the head: First, the all-too-audible crack, accompanied perhaps by a moment of surprise. Then, the swelling and, if we’re lucky, just a minor bump or scrape.

But what happens on the other side of our skulls when we hit our heads? If we can bruise, scrape and cut the relatively tough tissue of our skin and muscle with an impact, what happens to the cells that comprise the spongy, gelatinous matter of our brains?

That question is on the minds of UC Santa Barbara researchers Kimberly Turner,Megan Valentine, Adele Doyle and industrial partner Owl Biomedical, as they investigate — on the cellular level — what happens when mechanical forces are applied to brain cells. With funding from the National Science Foundation, the multidisciplinary team will integrate mechanical engineering, biophysics, neuroscience and bioengineering to acquire fundamental knowledge about the brain’s response to various types of mechanical force. The project is part of the federal Brain Research through Advancing Innovative Neurotechnologies (BRAIN) Initiative.

“Mechanical forces have been shown to impact cells a lot,” said Turner, who specializes in micro-electrical-mechanical systems, or microscopic machines. Far from being isolated units of life, cells — stem cells in particular — take cues from their environment that, for example, direct them to differentiate into one type of cell or another, or to start healing processes.

But a major limitation to understanding the reactions of individual neural cells to forces has been the inability to reliably apply impact or pressure to them.

Enter μHammer (“microHammer”), a cellular-scale machine built to tap, strike, squeeze and poke individual neural progenitors (and later, neurons and neural tissue) to elicit responses that will then be studied and recorded to add to a body of knowledge that can help unlock the mysteries of the brain.

As the name denotes, it’s a tiny machine. In fact, it’s the world’s smallest hammer. Modeled after cell-sorting technology developed by Owl Biomedical, used typically for medical diagnostics and immunotherapies, the μHammer flows individual cells through and subjects each of them to one of a variety of physical forces.

“This project will enable precision measurements of the physical, chemical and biological changes that occur when cells are subjected to mechanical loading, ranging from small perturbations to high-force, high-speed impacts,” said Valentine, whose lab studies how forces affect living materials. “Our technology will provide significantly higher forces and faster impact cycles than have previously been possible, and by building these tools onto microfluidic devices, we can leverage a host of other on-chip diagnostics and imaging tools, and can collect the cells after testing for longer-term studies.”

With the new devices and methods, Valentine added, the researchers expect to gain fundamentally new insight into the causes and progress of brain injuries due to trauma.

The μHammer is currently undergoing the process of characterization, whereby the types and magnitudes of forces it can apply are being measured and recorded in anticipation of the first set of neuron-smashing experiments.

The knowledge gained by these experiments could pave the way toward a better understanding of neural conditions such as Alzheimer’s disease as well as traumatic brain injury, a currently incurable and often insidious condition that affects everyone from soldiers, to athletes in contact sports, to anyone who has an accident. It may also lead to better prevention of such injuries by elucidating, for instance, what types of forces affect the neural cells most so helmets can be designed to buffer them.

Additionally, according to Valentine, the tools developed for this project will have broad applications beyond brain cell research and help researchers gain insight on how forces affect other cells and tissue types.

“Our studies could transform our understanding of how cells process and respond to force-based signals,” she said. “These signals are essential in development and wound healing in healthy tissues, and are misregulated in diseases such as cancer.”