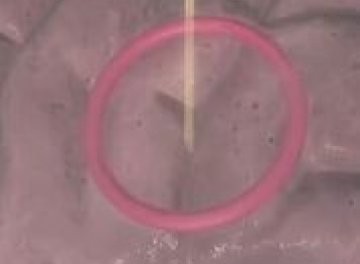 Opening the blood-brain barrier in a localized region to deliver chemotherapy to a tumor is a predicate for utilizing focused ultrasound for the delivery of other drugs, DNA-loaded nanoparticles, viral vectors, and antibodies to the brain to treat a range of neurological conditions, including various types of brain tumors, Parkinson’s, Alzheimer’s and some psychiatric diseases. (Credit: Image courtesy of Focused Ultrasound Foundation)

The blood-brain barrier has been non-invasively opened in a patient for the first time. A team at Sunnybrook Health Sciences Centre in Toronto used focused ultrasound to enable temporary and targeted opening of the blood-brain barrier (BBB), allowing the more effective delivery of chemotherapy into a patient’s malignant brain tumor.

The team, led by neurosurgeon Todd Mainprize, MD, and physicist Kullervo Hynynen, PhD, infused the chemotherapy agent doxorubicin, along with tiny gas-filled bubbles, into the bloodstream of a patient with a brain tumor. They then applied focused ultrasound to areas in the tumor and surrounding brain, causing the bubbles to vibrate, loosening the tight junctions of the cells comprising the blood-brain barrier and allowing high concentrations of the chemotherapy to enter targeted tissues.

“The blood-brain barrier has been a persistent impediment to delivering valuable therapies to treat tumors,” said Dr. Mainprize. “We are encouraged that we were able to open this barrier to deliver chemotherapy directly into the brain, and we look forward to more opportunities to apply this revolutionary approach.”

This patient treatment is part of a pilot study of up to 10 patients to establish the feasibility, safety and preliminary efficacy of focused ultrasound to temporarily open the blood-brain barrier to deliver chemotherapy to brain tumors. The Focused Ultrasound Foundation is currently funding this trial through their Cornelia Flagg Keller Memorial Fund for Brain Research.

“Breaching this barrier opens up a new frontier in treating brain disorders,” said Neal Kassell, MD, Chairman of the Focused Ultrasound Foundation. “We are encouraged by the momentum building for the use of focused ultrasound to non-invasively deliver therapies for a number of brain disorders.”

Opening the blood-brain barrier in a localized region to deliver chemotherapy to a tumor is a predicate for utilizing focused ultrasound for the delivery of other drugs, DNA-loaded nanoparticles, viral vectors, and antibodies to the brain to treat a range of neurological conditions, including various types of brain tumors, Parkinson’s, Alzheimer’s and some psychiatric diseases.

The procedure was conducted using Insightec’s ExAblate Neuro system. “This first patient treatment is a technological breakthrough that may lead to many clinical applications,” said Eyal Zadicario, Vice President for R&D and Director of Neuro Programs, Insightec.

While the current trial is a first-in-human achievement, Dr. Kullervo Hynynen, senior scientist at the Sunnybrook Research Institute, has been performing similar pre-clinical studies for about a decade. His research has shown that the combination of focused ultrasound and microbubbles may not only enable drug delivery, but might also stimulate the brain’s natural responses to fight disease. For example, the temporary opening of the blood-brain barrier appears to facilitate the brain’s clearance of a key pathologic protein related to Alzheimer’s and improves cognitive function.

Based on these two pre-clinical studies, a pilot clinical trial using focused ultrasound to treat Alzheimer’s is being organized.

About The Blood-Brain Barrier

The blood-brain barrier (BBB) is a protective layer of tightly joined cells that lines the blood vessels of the brain and keeps harmful substances, such as toxins and infectious agents, from entering the surrounding tissue. Unfortunately, this barrier also prevents certain drugs from reaching their targets within the brain in adequate concentrations. Safely and temporarily opening the barrier in a well-defined area to deliver drugs at therapeutic levels is a long-sought goal for treatment of a wide variety of neurological conditions including brain tumors, Alzheimer’s disease, Parkinson’s disease and epilepsy.

Currently, there are limited options to circumvent the blood-brain barrier and deliver drugs. Drugs can be directly injected into the brain, with the risk of hemorrhage, infection or damage to normal brain tissue from the needle or catheter. The pharmacological agent mannitol has been used to disrupt the barrier when injected into the blood supply, but this approach is uncontrolled and non-selective and can further be associated with significant effects on blood pressure and the body’s fluid balance.