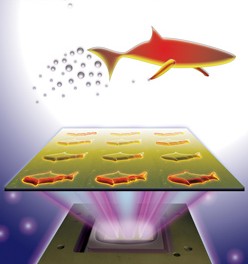 Nanoengineers at the Univ. of California, San Diego used an innovative 3-D printing technology they developed to manufacture multipurpose fish-shaped microrobots—called microfish—that swim around efficiently in liquids, are chemically powered by hydrogen peroxide and magnetically controlled. These proof-of-concept synthetic microfish will inspire a new generation of “smart” microrobots that have diverse capabilities such as detoxification, sensing and directed drug delivery, researchers said.

The technique used to fabricate the microfish provides numerous improvements over other methods traditionally employed to create microrobots with various locomotion mechanisms, such as microjet engines, microdrillers and microrockets. Most of these microrobots are incapable of performing more sophisticated tasks because they feature simple designs—such as spherical or cylindrical structures—and are made of homogeneous inorganic materials. In this new study, researchers demonstrated a simple way to create more complex microrobots.

The research, led by Profs. Shaochen Chen and Joseph Wang of the NanoEngineering Dept. at the UC San Diego, was published in Advanced Materials.

“We have developed an entirely new method to engineer nature-inspired microscopic swimmers that have complex geometric structures and are smaller than the width of a human hair. With this method, we can easily integrate different functions inside these tiny robotic swimmers for a broad spectrum of applications,” said the co-first author Wei Zhu, a nanoengineering PhD student in Chen’s research group at the Jacobs School of Engineering at UC San Diego.

“The neat thing about this experiment is that it shows how the microfish can doubly serve as detoxification systems and as toxin sensors,” said Zhu.

“Another exciting possibility we could explore is to encapsulate medicines inside the microfish and use them for directed drug delivery,” said Jinxing Li, the other co-first author of the study and a nanoengineering PhD student in Wang’s research group.

How this new 3-D printing technology works
The new microfish fabrication method is based on a rapid, high-resolution 3-D printing technology called microscale continuous optical printing (μCOP), which was developed in Chen’s lab. Some of the benefits of the μCOP technology are speed, scalability, precision and flexibility. Within seconds, the researchers can print an array containing hundreds of microfish, each measuring 120 microns long and 30 microns thick. This process also does not require the use of harsh chemicals. Because the μCOP technology is digitized, the researchers could easily experiment with different designs for their microfish, including shark and manta ray shapes.

“With our 3-D printing technology, we are not limited to just fish shapes. We can rapidly build microrobots inspired by other biological organisms such as birds,” said Zhu.

The key component of the μCOP technology is a digital micromirror array device (DMD) chip, which contains approximately two million micromirrors. Each micromirror is individually controlled to project UV light in the desired pattern (in this case, a fish shape) onto a photosensitive material, which solidifies upon exposure to UV light. The microfish are built using a photosensitive material and are constructed one layer at a time, allowing each set of functional nanoparticles to be “printed” into specific parts of the fish bodies.

“This method has made it easier for us to test different designs for these microrobots and to test different nanoparticles to insert new functional elements into these tiny structures. It’s my personal hope to further this research to eventually develop surgical microrobots that operate safer and with more precision,” said Li.