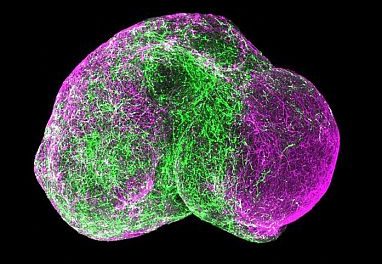 After spheroids representing two different brain regions fuse in a dish, neurons from one spheroid (green) migrate into the other and forge connections with the neurons there. (Image Credit: Pasca lab, Stanford University)

Brain development is a complicated process. During mid-to-late gestation, neurons migrate from deep brain structures and organize themselves into the tissues that will become the human cerebral cortex—the outer layer of the brain and seat of higher-order mental functions. The brain is especially vulnerable during this building process. Glitches in this period are thought to set the stage for autism, schizophrenia, and other neurodevelopmental brain disorders.

An autism-related disorder called Timothy syndrome is caused by mutations in the CACNA1C gene, which codes for the CaV1.2 calcium channel. The function of these channels is to transport calcium ions into cells. The altered channels stay open much longer than usual, which allows calcium ions to continue flowing into cells abnormally. Calcium ions are involved in many different functions during development, including cell-to-cell communication and migration.

To study prenatal brain development and how such genetic mutations disrupt the process, a team led by Dr. Sergiu Pasca at Stanford University created a miniaturized brain model by directing human stem cells in a dish to become neurons and form 3-D brain organoids or brain-region “spheroids.” The studies were partially funded by NIH’s National Institute of Mental Health (NIMH). Results were published in the May 4, 2017, issue of Nature.

The team coaxed 3-D cell cultures to acquire the characteristics of two specific regions of the forebrain (dorsal and ventral) during early development. The two types of spheroids fused together when placed near each other, simulating the stage of development when neurons begin migrating from deep regions of the forebrain toward the cerebral cortex.

In brain spheroids derived from skin cells of patients with Timothy syndrome, the researchers discovered a defect in the migration of the GABAergic neurons. The neurons moved more frequently but less efficiently. The scientists could experimentally correct this problem with drugs that reduce the activity of Cav1.2 channels.

“The exquisite timing and placement of these different neuron cell types is critical for establishing a balance between excitation and inhibition within brain circuits. This balance is thought to be disrupted in brain disorders,” explains Dr. David Panchision, chief of the NIMH program that supports the project. “Re-playing these developmental processes with a patient’s own cells can allow us to determine what distinguishes these different disorders at a molecular and cellular level.”

“[This] recapitulation of a pivotal stage in the cortex’s formation demonstrates the technique’s promise for discovery—and even for testing potential interventions,” says NIMH Director Dr. Joshua Gordon. “It moves us closer to realizing the goal of precision medicine for brain disorders.”